skip to main content
Check out our Excellent students!
Trinity Thorpe: GECHS Graduation Senior
Click the image to see her successes!
GCHS Proud to Announce
Students who were honored by the NCHSAA for having a 3.5 GPA!  Incredible!
Extra Effort Award: Ashlyn Smoot
Ashlyn Smoot is a two-sport athlete at Granville Central and is this week's winner of the Tom Suiter Extra Effort Award.
NCHSAA Performance of the Week award
Khalia Mortan from GCHS is a recipient of the NCHSAA Performance of the Week award
NCAEOP District 10 Staples Scholarship Winner
"Congratulations to Jayda Collins NCAEOP District 10 Staples Scholarship winner. We are very proud of you!" ~Mrs. Rice
Students to attend Prestigious Governor's School of NC
The Governor's School of North Carolina is a prestigious five and one-half week summer residential program for intellectually gifted high school students, integrating academic disciplines, the arts, and unique courses on each of two campuses; Salem College or Meredith College. The curriculum focuses on the exploration of the most recent ideas and concepts in each discipline and does not involve credit, tests, or grades.

The following students were selected via an extremely competitive process to attend 2018 Governor's School: 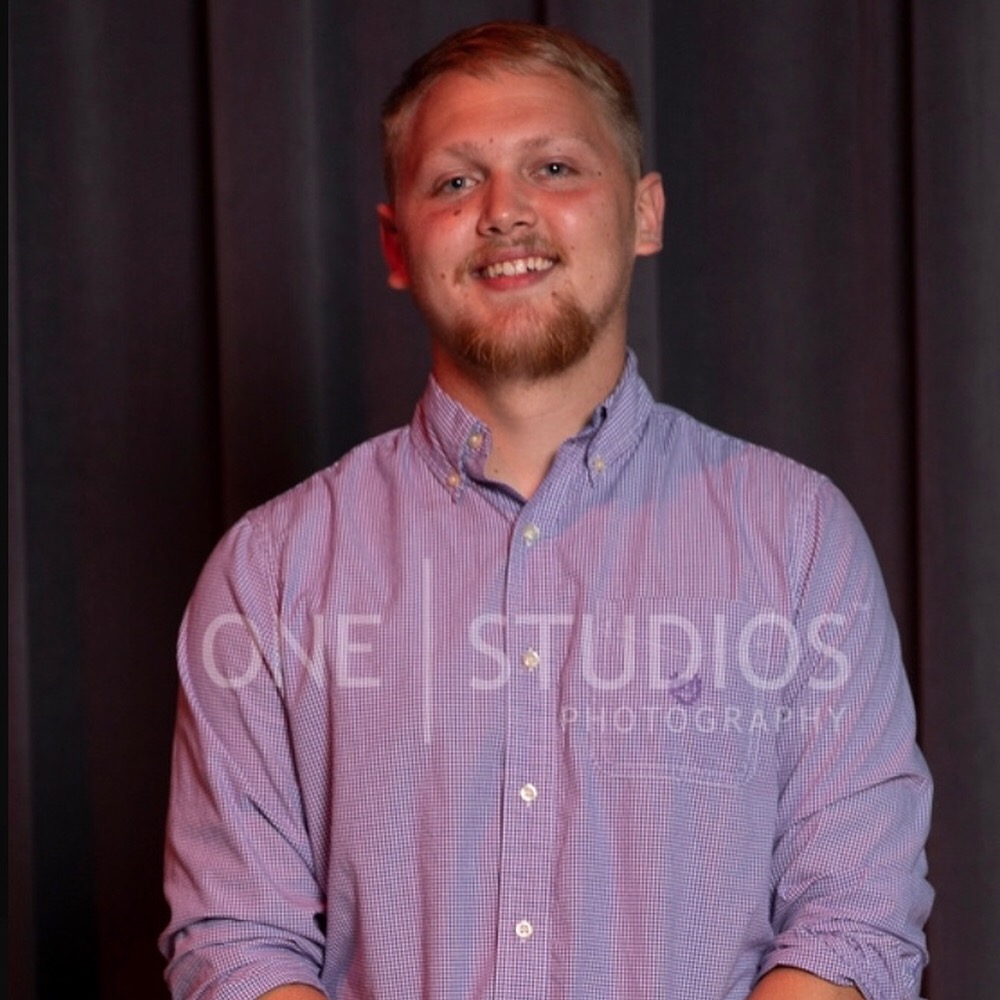 Dylan Beckwith, age 22, is the son of Karith Bishop and Leroy Beckwith. He grew up in Durham, NC and Columbus, GA before finding his home in Oxford, NC.

He graduated from Granville Central High School in 2014. Dylan played football in high school and is currently coaching a high school team which he loves more as a hobby versus a side job.

Apprentices work 32 hours a week and attend the community college one day a week. They get paid for 40 hours which allows them to get paid while they go to school. Their education is paid for as well so they earn a degree debt free.

NCTAP.org and the apprenticeship program is an opportunity to be considered by students and parents as they explore post secondary education and career readiness.

Kory Hammett is named a Wendy's High School Heisman School Winner!
We are excited that Kory Hammett has been named a 2017
Wendy's High School Heisman School Winner for J. F. Webb High
School!
We at Wendy's are proud of your achievement, and you should be too.
As a School Winner, you will receive a Wendy's High School Heisman letterman
patch and certificate in early 2018. In addition, you will move on for the chance to
become a State Finalist.
Tell your family and friends by sharing this badge on social media
using #WendysHighSchoolHeisman or #WendysHeisman
Granville County Students participate in NC Honors Chorus
5th graders Jana Tackema and Grayson Gaul, of Tar River, and Natalya Silver, from Creedmoor Elementary, were selected by the state judge to be members of the 2017 Elementary NC Honors Chorus. They attended The North Carolina Elementary Honors Chorus at the Stevens Center in Winston Salem and did a fantastic job of representing our county. They were accompanied by their school music teachers, Angela Mangum of Tar River and Brandon Roeder of Creedmoor Elementary. Mrs. Mangum was also recognized at the event for being the 2016 North Carolina Music Teacher of the Year.
Granville County Students Participate in Hour of Code 2017
Click on the image to see a slideshow of students working on the Hour of Code
Terence Harcum - Granville Central High School - NCHSAA Performance of the Week Award 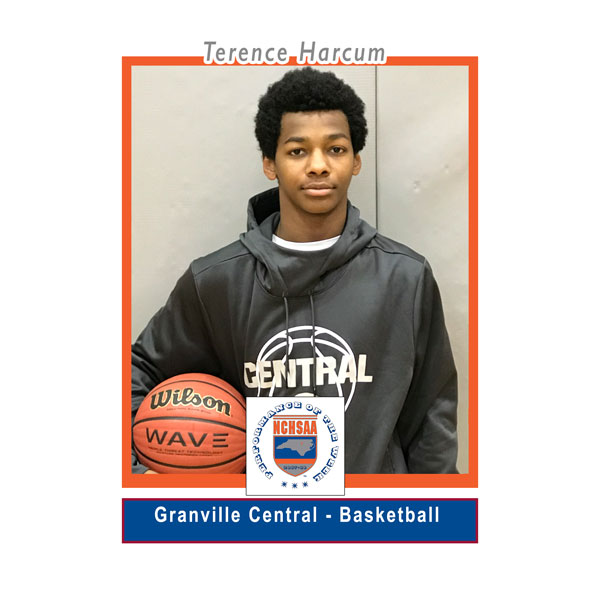 Terence Harcum from Granville Central High School has been named a recipient of the NCHSAA Performance of the Week award for the week from January 8-13th. He is featured on NCHSAA website. Please click on this block to see the NCHSAA Website.

Harcum, a freshman point guard for the basketball team, lifted Granville Central to a 2-1 record on the week averaging more than 30 points, 5 assists and 7 steals per game. In a road win over Louisburg, Harcum scored 23 points, grabbing four rebounds and tallied 6 assists and steals. He exploded for 36 points in a 79-75 overtime victory over Southern Vance, including hitting a contested three-pointer to send the game to overtime after breaking a double team. He had 32 points, 7 rebounds and 9 steals in a 71-67 loss to Roanoke Rapids.

Weekly recipients will be recognized on the NCHSAA Website and social media pages. They will also be honored at a banquet for all recipients from this year in late April.

Liz Schlemmer reports on the decreasing use of lockers at North Carolina high schools, as technology replaces the traditional use of textbooks at some schools.

The bell rings at Granville Central High School to signal lunch time on a recent afternoon. Hundreds of students pour into the hallways carrying bright-colored backpacks, lunches and laptops. But not one student is holding a book – or stopping at a locker.

"I never use my locker," says sophomore Makayla Debolt, while standing in a long hallway of lockers. "The last time I used my locker was in the 6th grade, and I barely used it then."

Makayla’s not alone. Here at Granville Central High, students have to request a locker. Assistant Principal Dwayne Waddey has been sitting at lunch every day for the first week of school, waiting with a clipboard for students to sign up for one.

“We've got over 500 lockers and about 670 kids, and only 7 or 8 of them signed up for lockers," Waddey said. "When I got here, I asked myself why they don't use lockers, but since they have less books and with the computers, they have no need for lockers."

Granville Central High is ahead of the curve when it comes to digital learning in North Carolina. It's a rural school about 30 miles north of Raleigh that graduates about 120 students a year. When the class of 2018 graduates, each student will return a MacBook Air to the school district. This is what's called a 1-to-1 school, where every student has an assigned computer.

Less than 40 percent of schools in the state have a ratio of one computer per student, and at some of those schools, the students can't take the devices home. Granville County Schools started its digital initiative relatively early, back in 2009, with one high school going 1-to-1. Now it offers devices to students at all of its high schools.

The district's Director of Instructional Technology Services Vanessa Wrenn sees the trend of students not using lockers as a good sign of the school district’s progress with its digital initiative. She’d even like to see the high school some day remove all of its lockers and put charging stations in their place.

Until then, Wrenn says Granville County Schools has worked hard to get to this point.

"When you’re doing something for the first time, you’re thinking of everything. You’re thinking of the infrastructure. Can your internet handle it? Do you have enough access points? Training, your teachers, security," Wrenn said.

At first, the computers were bought with grants, and now they’re paid for fully by state funds dedicated to technology. In 2013, the North Carolina General Assembly passed a law stating its "intent to transition" to digital learning materials by 2017.

So what do those materials look like in a classroom?

Stacey Mangum is an English teacher who shares a digital notebook with her students. They can type questions from their laptops while she teaches from a smartboard.

"I can touch it, write on it, go to websites with it, and if my computer is not hooked up to it, it’s like a whiteboard," Mangum explains.

She says the technology is great for getting deep into literature and taking notes in the margin, and some students can take more advanced classes online. Mangum also likes being able to text her students reminders to study for a quiz, but she says all this technology could have a drawback.

"If you don’t know how to communicate through talking, you become shy, it becomes difficult for you to step outside of your box," Mangum said. "And when you go to apply for a job or get employment, you might not interview well."

When Mangum was in high school ten years ago at Granville South, she says she also didn’t use a locker.

"We just kind of carried everything with us,” Mangum said. “We had the giant book bags, with every textbook for our four classes."

Today, her classroom floor is strewn with bags. Although the students carry light backpacks, they also have sports equipment and jackets and snacks in hand. But it hasn’t occurred to any of them to get a locker. Sophomore Macy Lowery says her older brother tipped her that lockers just weren’t cool.

"My brother told me ‘Don’t get a locker because you’ll be the only one’,” she said. “So, I didn’t. I didn’t want to look like a freshman." The class laughs knowingly.

Another student says she thought the lockers were for decoration. In one way, Mangum says, they actually are.

Finding a Granville Central High student with a locker isn't easy. Principal Brian Mathis came across two in the course of a day. One was a freshman. Then there was sophomore Cameron Harris, who got a locker for the first time this year.

Cameron says before she was like many of her fellow classmates, carrying around all her stuff, including equipment for cheerleading and band. She was so frustrated carrying everything, that she asked her mom to bring her things to school at the end of the day.

Cameron opens the door to her locker. She struggles a little, because she doesn’t remember the combination. When she finally gets it open, it is totally empty. Not a single celebrity photo, or notepad, or pack of pens, or even one textbook.

“I didn’t have much today, so I didn’t put it in there,” Cameron explains. “It’s just my bag and my shoes, so I left it in my classroom.” 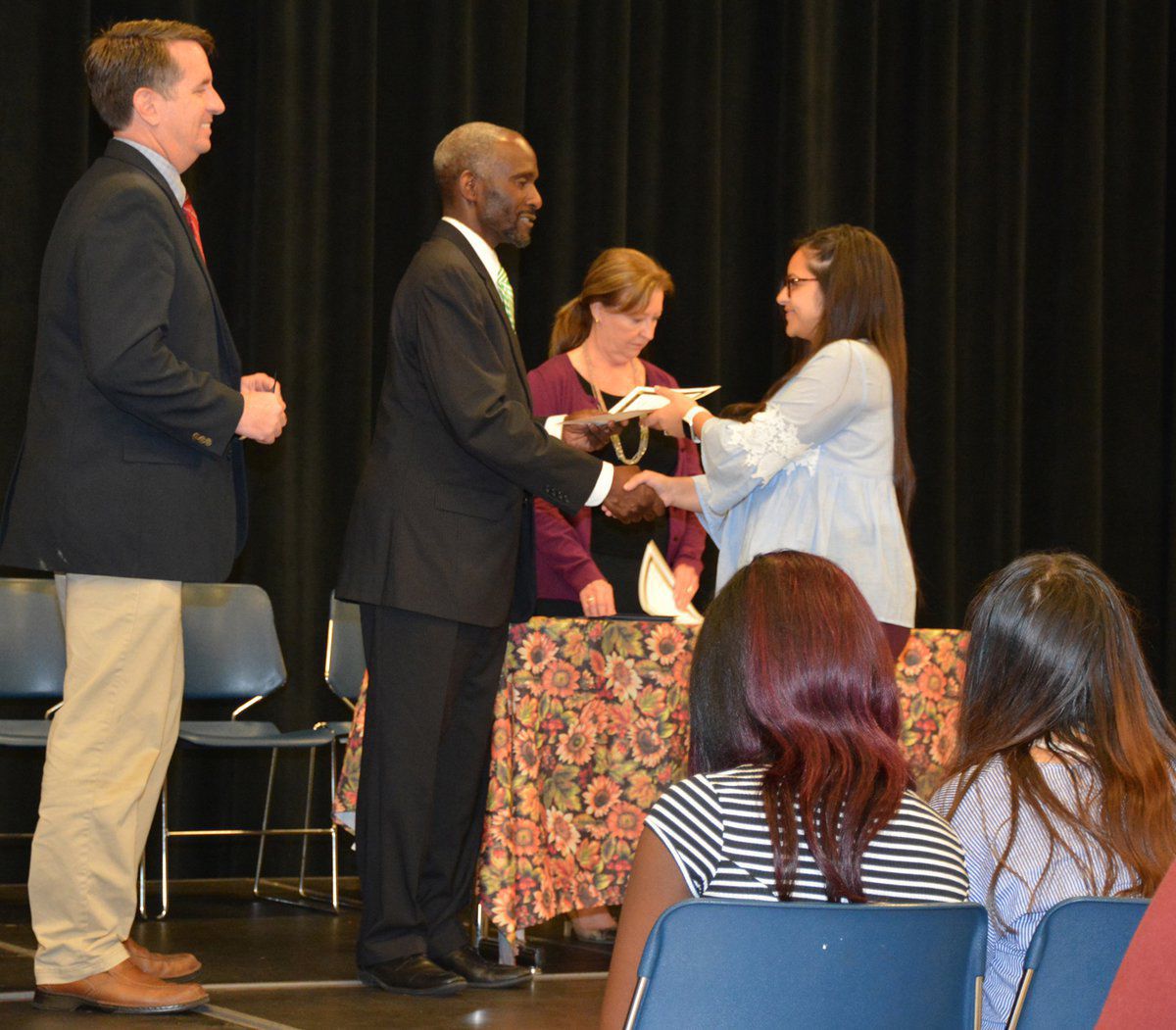 Nearly one half of Granville Early College High School's students attained the honor of Student of Merit this academic year. A ceremony was held in their honor on Monday, Sept. 25, in the Vance-Granville Community College Civic Center. 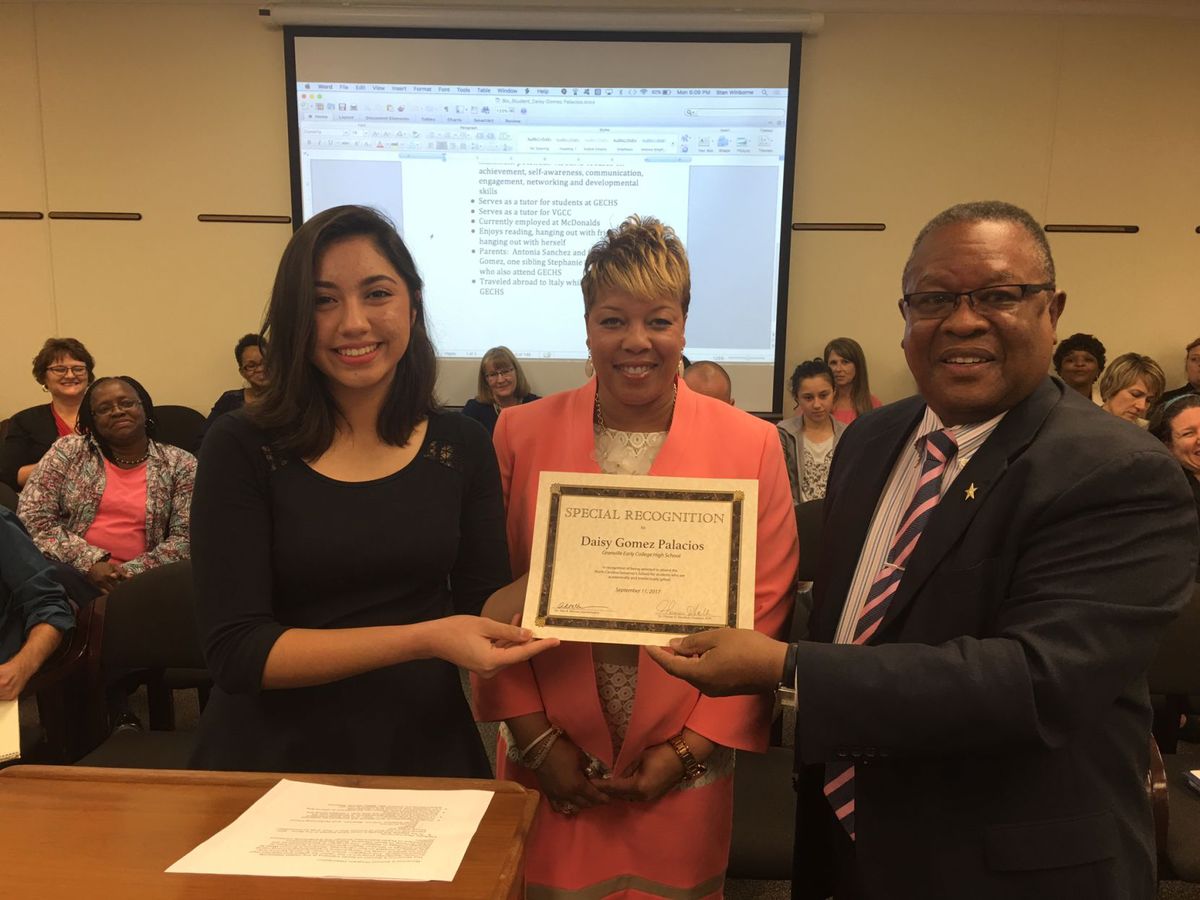 Palacios, who was selected to attend Governor's School, was recognized during Monday’s Granville County Board of Education meeting. This year, 13 Granville students applied. According to Governor's School, each public school system superintendent may nominate one academic area student will will automatically be invited to attend. Then-Granville Superintendent Dorwin Howard selected Palacios from among the Granville applicants as his nominee.

Welcome to the SchoolBlocks
self-guided tour!

The most common question we receive is, how is SchoolBlocks inspired by Pinterest? SchoolBlocks eliminates navigation bars and uses a block style layout that’s similar to Pinterest. It creates a unique and engaging browsing experience, optimizes for mobile and removes a lot of navigational complexity.

Please click on the red plus signs found on this page to learn more about specific features.